The Secret Identity Of Christopher Columbus: A Celtic-Jewish Spanish Pirate? 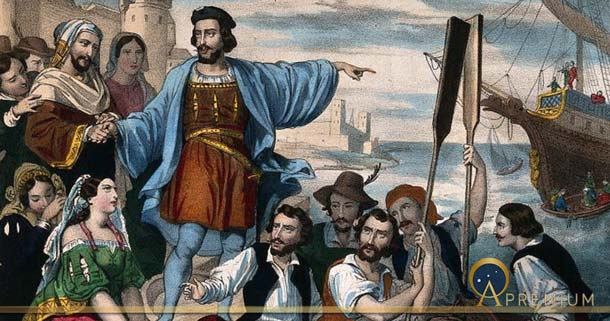 The Christopher Columbus that everybody learns about in school may have been an entirely different person than is generally being taught. Columbus was a fascinating person, and the more one studies this incredible man, the more incredible his narrative becomes. The man who sailed in 1492 for the New World was a mystic, an adventurer, a utopian idealist and man of great courage and vision. Was Columbus a Celtic-Jewish agent of the Knights Templar? Had he been a pirate before working for the Spanish crown? Had he assumed the identity of an Italian wool merchant to hide his real identity? Was he a red-haired Jewish sea captain who had been to Iceland? Had some of his Portuguese crew crossed the Atlantic before? Is it possible that Columbus knew perfectly well that he would reach a New World by traversing the Atlantic, rather than negotiating a new route to China, which was the decoy purpose he gave the Spanish royalty for his voyage?

The Mistaken Identity Of Christopher Columbus

Despite the popular grade school depiction, there is a great deal of evidence that Columbus was not actually Italian, but a Spaniard who had assumed the identity of a young Italian wool merchant whom he had once met and who had died at sea. By coincidence, the young Italian wool merchant from Genoa had the same name as himself (at least in translation). Cristobal Colón, known as Columbus, was by some evidence a Spanish Jew, living at a time when that religious group was being persecuted. For this reason he decided to conceal his identity. Also, he was in possession of several maps that showed the coasts and islands of North – and South America.

According to William Anderson and many other Columbus researchers, one can examine two parallel lives—one of Cristoforo Colombo, the wool merchant, born in the latter half of 1451 to Dominick and Susana Colombo in Genoa (Italian “Genova”) in the Liguria section of Italy; and the other of Cristobal Colón, born in mid-1460, as the illegitimate son of Prince Carlos (Charles IV) of Viana, and the Jewess Margarita Colón, in the Jewish ghetto of the Balearic island of Mallorca, near the village of Genova which is now a district of Palma, the principal city. The city of Palma on Mallorca was a major mapmaking center at the time.

Like this Preview and want to read on? You can! JOIN US THERE  ( with easy, instant access  ) and see what you’re missing!! All Premium articles are available in full, with immediate access.

For the price of a cup of coffee, you get this and all the other great benefits at Ancient Origins Premium. And – each time you support AO Premium, you support independent thought and writing.

David Hatcher Childress , is a captivating speaker and the author or coauthor of over 20 books. He is the founder of the World Explorer’s Club . He is the author of Pirates and the Lost Templar Fleet: The Secret Naval War Between the Knights Templar and the Vatican

Top Image : Christopher Columbus, surrounded by a crowd of people, is about to embark on his ship, August 1492. ( Wellcome Images / CC BY-SA 4.0 )